It was also Elvis at his best.

Besides 'Hound Dog', Elvis also sang 'I Want You, I Need You, I Love You'. 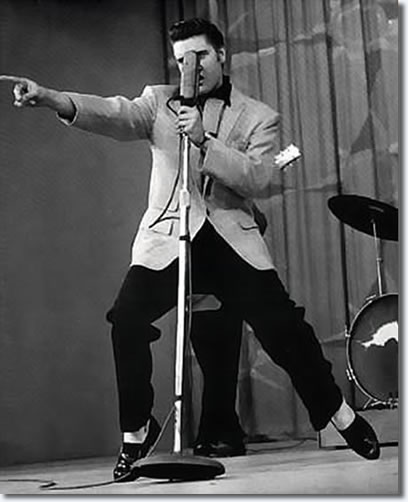 The next day, the press nicknamed him 'Elvis the Pelvis'. Many described his act by comparing it to a striptease. Jack Gould of The New York Times declared', Mr. Presley has no discernible singing ability', while John Crosby of the New York Herald Tribune called Elvis 'unspeakably untalented and vulgar'.

The criticism prompted parents, religious groups from the North and South, and the Parent-Teacher Association to condemn Elvis and rock 'n' roll music by associating both with juvenile delinquency.

to tell him that based on the 'hundreds of thousands of 'pan' letters' he had received following the show that 'you have a star on your hands'.

Monday, July 2, 1956, Elvis left the Hilton Hotel for a 2 p.m. date at the RCA studio on E. 24th and over the next seven hours recorded 'Hound Dog' and 'Don't Be Cruel', which would be released five weeks later and become his most successful single, racking up 11 weeks at No. 1. He also recorded a nice ballad', Any Way You Want Me'. Colonel Parker tell RCA vice president Larry Kananga during the day that 'Hound Dog' may become such a big hit that RCA may have to change it's corporate symbol from the 'Victor Dog' to the 'Hound Dog'.

This was the first session where Elvis made it clear he was the real producer of his records. He pounded everyone through 31 takes of 'Hound Dog' before he felt he had it the way he wanted it.

July 3,, In the morning, Elvis repaired to Penn Station to start a 27-hour train ride home to Memphis.

At Penn Station he ran into fellow singer Gene Vincent.

July 4, Upon arriving in memphis, Elvis disembarks at a small signal stop called White Station and walks home to Audubon Drive, arriving just as a new swimming pool is being filled. He spends the afternoon with his family and a Memphis girlfriend, Barbara Hearn. Elvis performs a charity concert at Memphis' Russwood Park

, in the evening, where he told the crowd',You know those people in New York are not going to change me none.

I'm gonna show you what the real Elvis like tonight'.

July 5, Elvis begins the first real vacation that he has had since gaining national recognition.

She and her mother were injured in an auto acident the previous day, as they returned home from a picnic to get ready to attend Elvis' performance at

Elvis' presence in Biloxi fuels escalating rumors that he is engaged to June. June Juanico is a girl Elvis met just one year ago in Biloxi, Mississippi. Elvis spends much of the next three weeks in Biloxi.

, then into a private home nearby, after his car is scratched and covered with messages by fans in the Sun 'N' Sand parking lot.

July 10, Elvis' presence in Biloxi fuels escalating rumours that he is enganged to June.

After hearing the rumours articulated on a New Orleans radio station, he and June drive to New Orleans with the rest of the gang to dispel it, then visit the Pontchartrain Beach Amusement Park before heading back to Biloxi. Following is an interview with Jim Steward in New Orleans. Elvis talks about the bad publicity after The Milton Berle Show

. Talks about not having yet recorded 'Hound Dog' and meeting Gene Vincent.

July 12, Elvis, June and the guys go deep-sea fishing on thye Aunt Jennie with June's mother, May, and her boyfriend Eddie Bellman. They have so much fun that Elvis calls his parents and invites them to come down and join him. Vernon and Gladys Presley arrive in Biloxi on the 13th. Gladys reports to Elvis that the Sun 'N' Sand parking lot is filled with fans who think he has returned to the hotel, not realising that the pink-and-white Cadillac is hers. The following day Elvis takes his parents deep-sea fishing.

Elvis Presley makes television and entertainment history with his Elvis: Aloha from Hawaii - Via Satellite special. Performed at the Honolulu International Center Arena on January 14, 1973, broadcast live at 12:30 AM Hawaiian time, beamed via Globecam Satellite to Australia, South Korea, Japan, Thailand, the Philippines, South Vietnam and other countries. It is seen on a delayed basis in around thirty European countries. A tape of the show will be seen in America on April 4th on NBC. The live broadcast in January attracts 37.8% of the viewers in Japan, 91.8% in the Philippines, 70% in Hong Kong, and 70-80% of the viewers in Korea. The April showing in America will attract 51% of the television viewing audience, and will be seen in more American households than man’s first walk on the moon. In all, it will be seen in about forty countries by one billion to 1.5 billion people. Elvis commissions an American Eagle design for his jumpsuit for this show, his patriotic message to his worldwide audience. Never has one performer held the world’s attention in such a way. Elvis is in top form physically and vocally. This is probably the pinnacle of his superstardom, one of the all-time great moments of his career. Elvis was very, very nervous at first. Nobody else had ever done a satellite show before.

He was the very first entertainer, ever, to do a satellite show.

It was very expansive to rent the satellite for one hour, so Colonel Parker

went to NBC, because they owned the satellite, actually it was their recording company. So they cut the deal and it was the first one ever.

Elvis was a nervous wreck. But as he went along rehearsing, and enjoying Hawaii, he became very comfortable with it. The thing about it, when you go on a satellite show, you go on stage at a certain time and you got to get off at a certain time, otherwise they will just cut you off, the satellite will cut you off after one hour. So the hardest part that Elvis was worried about, was to time it right.

But as we all know it went along perfectly. Joe Esposito was at the side of the stage while Elvis was performing with a flashlight and about ten minutes before the end time, he flashed the light to let Elvis know he had ten minutes left. It was an unbelievable performance, it was all for charity, and he was very comfortable when he walked on stage. He did a great job, looked fabulous. Can we ask for more?

A great singer, in a great location, great music and its now part of history.

Audience tickets for the January 14 concert and its January 12 pre-broadcast rehearsal show carry no price. Each audience member is asked to pay whatever he or she can. The performances and concert merchandise sales are a benefit raising $75,000 for the Kui Lee Cancer Fund in Hawaii. (Kui Lee was a Hawaiian composer who had died of cancer while still in his thirties.)

Read more about the Aloha Special, including an interview with show director, Marty Pasetta

Also Sprach Zarathrusta - See See Rider - Burning Love - Something - You Gave Me A Mountain - Steamroller Blues - My Way - Love Me - Johnny B. Goode - It's Over - Blue Suede Shoes - I'm So Lonesome I Could Cry - I Can't Stop Loving You - Hound Dog - What Now My Love - Fever - Welcome To My World - Suspicious Minds - Introductions by Elvis - I'll Remember You - Long Tall Sally / Whole Lotta Shakin' Goin' On - An American Trilogy - A Big Hunk O' Love - Can't Help Falling In Love