It's a sin, my darling
How I love you
Because I know
Our love could never be

It's a sin, my darling
How I love you
So much in love
And yet so far apart

February 25, 1961 - Elvis appears in Memphis at a luncheon in his honor, and numerous recent awards Elvis has received are shown to the press and others attending. A press conference follows'. Elvis Presley Day' is proclaimed by Tennessee Governor Buford Ellington. Every year after this, Elvis donates money to a list of Memphis-area charities, eventually reaching fifty or more, usually around Christmas time. Within a few years, to show their appreciation the city gives him a massive plaque listing fifty charities

On March 14, 1961, Elvis and assorted friends, assistants, and bodyguards flew to Los Angeles so he could begin production on his next film, Blue Hawaii. Upon his arrival, he spent a few fun-filled days with friends Juliet Prowse, Joan Blackman, and Pat Fackethal, a real-life stewardess selected to play a bit part as a stewardess in the film. Afterward, he buckled down to record the songs that would comprise the soundtrack. Elvis recorded the tunes for the modestly budgeted musical comedy in Hollywood as opposed to Nashville, where much of his non soundtrack music was produced.

It topped the Billboard albums chart two months after its October 1961 release. It was the No. 1 album in the country for 20 weeks, which set a record for a rock performer or group that lasted until 1977 when Fleetwood Mac's Rumors broke it. Blue Hawaii remained on the albums chart for 79 weeks and was awarded double platinum status by the RIAA in March 1992. 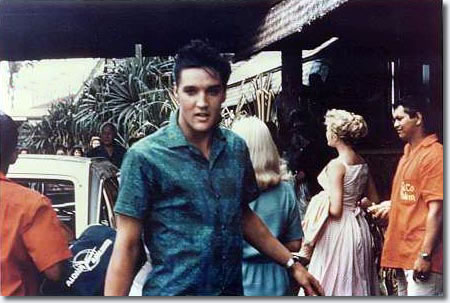 Something For Everybody : FTD Special Edition 2 CD

Elvis : From Nashville To Memphis : The Essential 60's Masters 5CD

The Country Side Of Elvis CD